There’s a new tech company in town called Music Audience Exchange (MAX). This firm targets branding, marketing, and music. For the past several years, MAX has planned to help improve brands’ network with their customers through their new tool, MAX Artist Matching Engine. This tool can cause a connection between musicians and brands with comparable followings and intentions who can most likely help each other. “Today’s marketers not only have to understand their target audienc

According to Music Business Worldwide, Warner Music Group made $917 million in revenues for the three months ending June 30, the company’s biggest fiscal Q3 since WMG was acquired by a group of investors led by Edgar Bronfman Jr. for $2.6 billion in late 2003. So what caused the boom in revenue? Yes, you guessed it, Streaming. Artists such Ed Sheeran, Bruno Mars, Gorillaz, Clean Bandit and TWICE are the company’s top selling artists whose successful album and single streams l 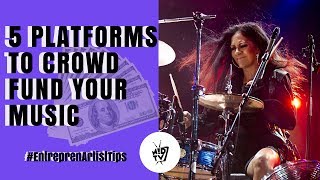 5 Platforms To Crowdfund Your Music

Happy Monday, folks! Our very own Tuko Proby shares 5 platforms to help you crowdfund your music. Crowdfunding is a great way for you to finance your projects from start to finish. Click play to get the details! How do you currently finance your projects? Let us know in the comments section. #music #crowdfunding #musicmarketing